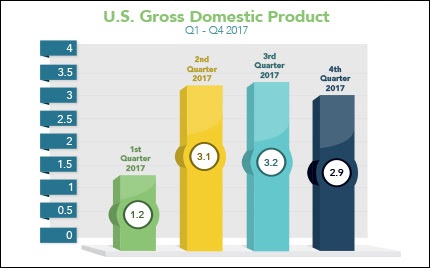 Home prices continued to rise in January due in part to the low amount of homes for sale on the markets. The S&P/Case-Shiller 20-City Home Price Index rose 6.4 percent from January 2017 to January 2018, up from 6.3 percent recorded from December 2016 to December 2017. Home prices were also up 0.8 percent from December to January. Inventory continues to be a real challenge for many would-be buyers. Currently, there is a 3.4-month supply of homes for sale, well below the 6-month supply that is seen in a healthy market.

Consumer inflation remained low in February. The Bureau of Economic Analysis reported that Personal Consumption Expenditures (PCE) and Core PCE rose 0.2 percent from January to February, both in line with estimates. The more closely watched Core PCE reading excludes volatile food and energy prices and February's figure was just below the 0.3 percent recorded in January. From February 2017 to February 2018, Core PCE came in at 1.6 percent, just above the 1.5 percent recorded in January. However, the reading is still well below the Fed's target range of 2 percent.

Last week in Review: GDP edged lower in fourth quarter 2017, while inflation remained tame in February.
Forecast for the Week: All eyes will be on Friday's release of the Jobs Report for March.

The labor sector will be front and center as the Jobs Report for March could be a market mover.

Manufacturing data from the ISM Index will be released Monday with the ISM Services Index reported on Wednesday.
The first of two key labor market reports will be delivered Wednesday from the ADP National Employment Report.
Look for weekly Initial Jobless Claims on Thursday.
On Friday, the Jobs Report for March will be released, which includes Non-Farm Payrolls, the Unemployment Rate and Hourly Earnings.
Remember: Weak economic news normally causes money to flow out of Stocks and into Bonds, helping Bonds and home loan rates improve. In contrast, strong economic news normally has the opposite result. The chart below shows Mortgage Backed Securities (MBS), which are the type of Bond on which home loan rates are based.